This week, we’re getting two different documentaries on the legendary Fyre Festival disaster, so it really feels like Christmas in January. But the scam gods have really smiled on us this week, because there’s yet another epic scandal unfolding before our eyes. Let me introduce you to Caroline Calloway, and her doomed tour of “creativity workshops.”

If you’re unfamiliar with Caroline Calloway, I’m so sorry, because she is going to become your new obsession. She’s basically an influencer who got famous for being an American going to Cambridge University, because I guess that’s novel? While there, she pulled the instantly iconic move of claiming she doesn’t have kneecaps so she could live in a prettier dorm. Yes, this really happened. In more recent times, Caroline got a half-million dollar book deal, which was amazing, until it went very wrong. When it became clear that Caroline had no intention of actually writing the book, the publishers canceled the deal, and she’s still in debt from having to pay back her $125,000 advance. Basically, she’s kind of a mess, which makes this latest drama even more amazing.

Back in December, Caroline announced that she was going on a national tour doing seminars, where she would be teaching her followers things like “vulnerability, authenticity, and making mistakes.” For four hours of this nonsense, she was charging $165, which is more than I spend on groceries in a month. The whole thing immediately seemed like a scam, based on fact that she hadn’t booked venues yet, and was posting on her Instagram stories about how she had no idea how to plan an event.

She has an event NEXT WEEK and she HASN'T BOOKED THE VENUE YET! Keep in mind she's already SELLING $165 TICKETS for this! pic.twitter.com/OgDXACfyWy

One of the goodie bag items that Caroline promised was a mason jar with a DIY wildflower kit, because it’s apparently 2012. Because this entire thing was a disaster, Caro ordered 1,200 mason jars to her STUDIO APARTMENT, without thinking at all about the space that 1,200 mason jars take up. I love this woman. She also promised that she would serve a lunch of home-cooked salad, and then complained repeatedly about how hard it was to cook. I’d like to point out that you can easily make a salad that requires absolutely no cooking, and no one would even care.

The first event, in Brooklyn, magically actually happened on Saturday, and of course, according to Caroline it was a huge success! So much so that she decided all the future dates in other cities should be canceled and moved to Brooklyn. If you think this sounds easier for Caroline and like a disaster for everyone else involved, you’d be correct. She posted an IG poll asking about rescheduling the dates, but in a classic delusional influencer move, both the answers were yes. Bless this mess. 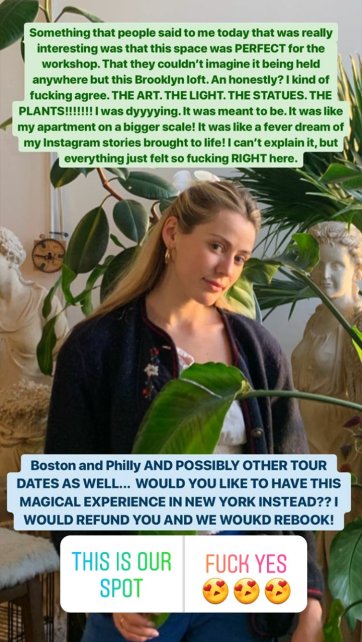 She had another workshop the next day in DC, which went relatively well, but it was clear that things were not going to end well for this poorly planned world tour. People started reporting Caroline to Eventbrite for breaking promises, and they said they were investigating her on Sunday night. For example, she promised to give everyone orchid crowns, but instead, everyone got one single orchid to wear in their hair, and they were forced to give it back at the end of the workshop. The homemade salad is also a major health code violation, aside from the fact that it (allegedly) tasted bad. In addition to all of this, she was planning tour dates in Europe, which she definitely did not have the proper visas for.

On Sunday night, someone who attended one of the workshops posted an AMA on Reddit, and there are some prime moments. My favorite answer is when she’s asked if she’s embarrassed about spending the money on the workshop: “Yes. You bet I am. I honestly had a good time and it was fun to be there, but the price tag was absolutely ridiculous.” Also, Caroline mentioned the fact that she went to Cambridge no less than seven times. She’s basically that friend who’s still talking about study abroad even though it was in 2010.

Then, early on Monday, Caroline posted an Instagram story explaining that she would be canceling the remainder of the tour. This whole statement is a wild ride, and she definitely takes way more credit than she deserves. I won’t pretend to know all the reasons, but it’s pretty clear that she was getting pressure from Eventbrite and everyone else on the planet to stop this scam. My personal favorite part is when she blames the cancelation on her “inexperience with event planning and GREED.” At least she knows she’s greedy. 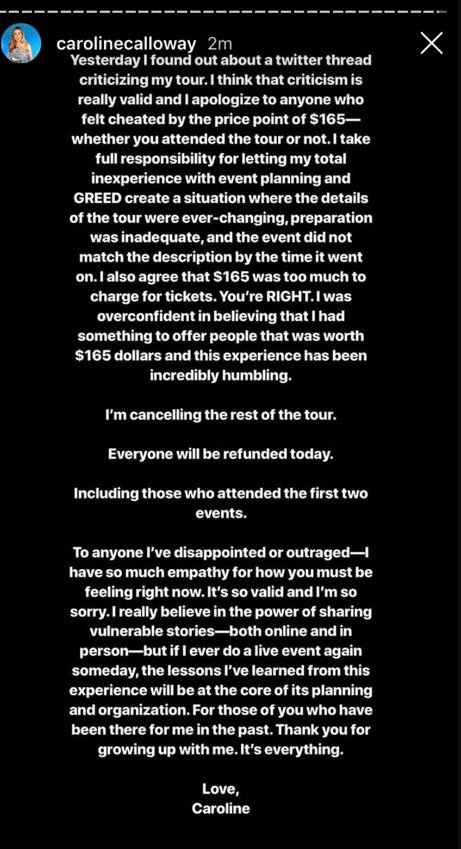 So there you have it. Refunds have been issued, and for now, Caroline has gone dark on Instagram. Personally, I’m excited to see what wild scheme she reemerges with, because with these people, it’s only a matter of time before they get bold enough to try it all again. The creativity workshops might be dead, but a good scammer doesn’t go away. I can’t wait for both Neflix and Hulu to make separate documentaries about this disaster! I’ll get the popcorn ready.

Previous Post: This Wellness Article Is Going Viral For All The Wrong Reasons
Next Post: UK groups fund illegal orphanages in Africa