5 Historical Figures Everybody Gets Totally Wrong

Abraham Lincoln freed the slaves, Napoleon overcame his height problems to conquer Europe, and Julius Caesar was murdered for inventing a controversial salad. These summaries aren’t 100 percent accurate, but they’re enough to help us get through a remedial history test … unless they’re based on propaganda and misinformation that’s been spread over many centuries, in which case large parts of your worldview are entirely worthless. For example …

Caligula Wasn’t Nearly As Perverse As You Think

Caligula is synonymous with the height of Roman depravity. Ancient Roman sources accused him of sleeping with his sisters, having men murdered on a whim while their families were forced to watch, talking to the moon, declaring himself a god, and planning to make his horse a consul. He’s generally regarded as one of the cruelest, maddest, and most decadent leaders in human history. Pop culture took that reputation and rolled with it. In 1979, Penthouse produced a big-budget movie about him, which turned out to be not so much a historical epic as a porno with an unusually elaborate plot. Caligula also appeared in I, Claudius, wherein he removes a fetus from his pregnant sister and eats it — every actor’s dream role. 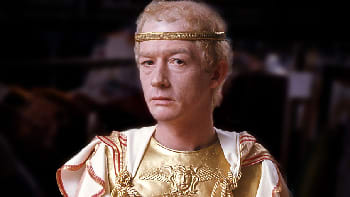 BBC/London FilmsWhich we cant show because the original footage was lost (and frankly, were not super broken up about it).


An Avengers Tattoo Just Made The Internet Lose Its Mind

Shockingly, there is no record that Caligula ate a fetus. His reputation was acquired through a combination of propaganda, rumors, misunderstood anecdotes, and a lack of proper sources. Caligula was assassinated after a four-year reign, and his murder needed to be justified by making him seem like a monster. All those depraved tales we just mentioned don’t appear in the historical record until about eight decades after his demise, in the writings of Suetonius, who was merely reporting rumors and hearsay. And rumors and hearsay are about all we have to go on.

The horse story, for example, was most likely a case of Caligula expressing exasperation with what he saw as the uselessness of his political opponents, not a serious plan. Caligula was by no means a nice guy; he was a vicious man in a vicious time. But he wasn’t a fetus-eating maniac.

King George III was infamously mad. There was even a movie about him called The Madness Of King George (not to be confused with The Melancholy Of King George II). And that reputation dovetails nicely with what you learned in school, that he was a psychotic tyrant hellbent on destroying freedom. 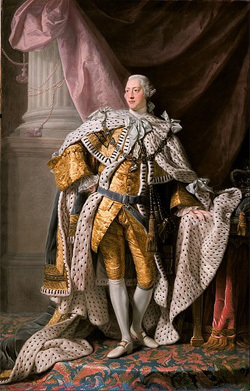 Allan RamsayThough in fairness, he wielded tyranny while looking like an absolute boss.

In reality, he was neither mad nor tyrannical — at least, not by the standards of the era. No British monarch has wielded more authority than their parliament since 1688, but it’s a lot easier to burn an effigy of a king than it is to sit down and have a learned debate on the intricacies of parliamentary democracy. The American colonies actually had the same representation that much of England did, like Manchester and Birmingham. And while it was reasonable to object to that, it doesn’t mean America was some hellish dystopia ruled by a cruel madman.

Revolutions are complicated, but George’s “madness” is touted as the singular reason Britain lost its American colonies. In reality, he was a diligent leader who showed an incredible attention to detail. There is some evidence that he had bipolar disorder, but that doesn’t inherently make someone intolerably unstable and unable to lead. George would retire from public and political life whenever he felt ill. And when he was on his game, he was an accomplished agriculturalist, military mind, historian, and astronomer. He did try hard to hang onto the colonies (and what ruler would simply let a big chunk of their territory go without a fight?), but he was also willing to work with America once it became clear that the war was lost. That’s a far cry from this image of the king: 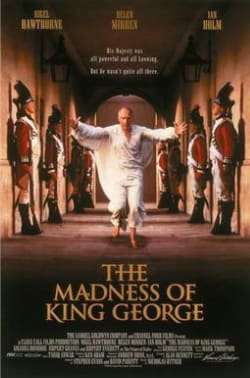 The Samuel Goldwyn CompanyThe movie’s score is nothing but two hours of “Yakety Sax.”

Ulysses S. Grant Wasn’t A Rampaging Drunk Who Got Lucky

Via Korsgaardscommentary.comWill we ever really know?

The Southern take was lionized by the Dunning School, a group of historians at Columbia University who propagated the Lost Cause Myth. Their idea that the Confederacy was fighting a doomed but noble battle to defend the South’s honor — the whole thing had nothing to do with slaves, you see — remains popular with many closeted and uncloseted racists to this day. And one of the most effective ways the Dunning School reinvented the war was by tweaking the image of the generals who fought it, Robert E. Lee and U.S.(A!) Grant. Lee was portrayed as a loyal, noble leader of men, while Grant was considered a low-down butcher who only won because of the Union’s superior resources. And alcohol. Lots and lots of alcohol. 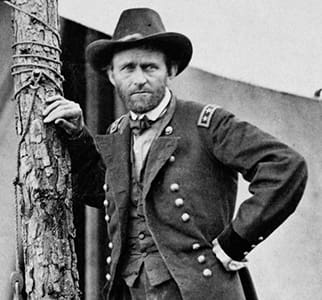 But Grant was a competent general, not (just) a booze-powered war machine. It is true that he struggled with alcohol consumption, but he was never drunk when his command was on the line or when going into battle. At Shiloh, a battle where he was rumored to be hammered, he was on the battlefield at 9 a.m., with all eyewitnesses accounting him dry. When Grant’s superiors in Washington got worried about his drinking, they sent newspaper reporter Charles Dana to gauge how blitzed he was getting. Dana wrote back, if you’ll allow us to paraphrase, “Not only is this guy not a drunk, but he’s also super sweet. We’re buds now!”

The most lurid account of Grant’s problem drinking during the war came from Three Years With Grant by Sylvanus Cadwallader, which was published in the 1950s. Its most infamous bit is about Grant going on a legendary bender at Vicksburg … which can’t be verified by any other sources, and was written by a guy who wasn’t with Grant for much of that battle. But it drove home the idea that Grant was an incompetent alcoholic during a time when Confederate monuments were being built all around the country. What a grand coincidence.

Mother JonesWho couldve ever guessed that erecting a monument to Nathan Bedford Forrest might have a double meaning.

The Real Macbeth Was Not Necessarily A Villainous Monster

Most of you are familiar with Macbeth from Shakespeare’s famous play, but the character is actually loosely based on a real king. Very loosely. To refresh your memories from high school English, Macbeth earns the trust of his aging king, Duncan, lets the old man stay the night at his castle, then murders him in his sleep so that he can become king instead. Macbeth then kills more people to cover up the crime, both he and his wife become psychotic, there are some witches involved, and then he dies. A feel-good story if there ever was one.

The real Macbeth was a little different. He did kill the previous king, Duncan, but not while he was a trusting guest in Macbeth’s own home. And Macbeth arguably had an equal or greater claim to the throne, so this wasn’t so much an insidious betrayal as a standard medieval rivalry that inevitably turned to bloodshed. They didn’t have recounts in 11th-century Scotland. 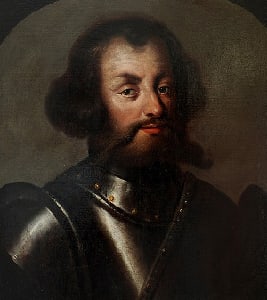 Jacob Jacobsz de Wet IIElection strategy at the time tended to focus less on courting voters and more on sticking your political opponents head on a pike.

We don’t know a lot about the real Macbeth’s reign, but he was by all accounts rather generous. He gave some land to a sect of monks, and while on a pilgrimage to Rome, he scattered money to poor people in the streets. The chronicler describing the event uses the same Latin word that’s typically used for casting seeds behind a plow, which is how Latin chroniclers said, “He made it rain, son.” But hey, at least he got to be a good guy on Gargoyles. 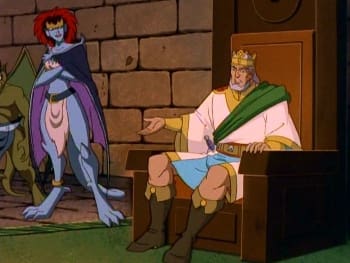 Cleopatra Did Not Get By On Her Looks

What do you picture when you think of Cleopatra? A great beauty? A manipulative seductress? Nothing, because you failed history class? You may be familiar with Elizabeth Taylor’s portrayal of her … 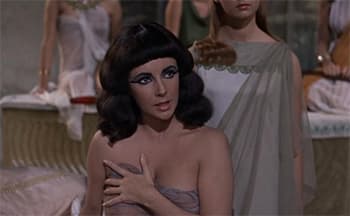 Twentieth Century FoxOthers of you may just now be learning that Elizabeth Taylor had a career beyond “perfume namesake.”

… or if you’re not an AARP member, maybe you know her best from HBO’s Rome, or Assassin’s Creed: Origins. 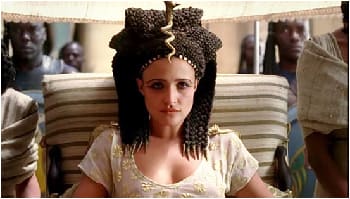 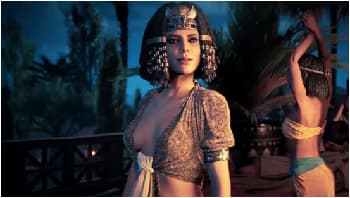 In every case, she’s a sexpot causing civil war in Rome by manipulating the hearts of Julius Caesar and Marc Antony, all while wearing little more than a series of strategically placed napkins. Nearly every depiction of her in Western art shows her as a flirtatious minx who only achieved her goals because she’s hot, like a BCE reality star. But all of this comes straight from Roman propaganda perpetuated by Augustus to discredit her and Antony, Augustus’ bitter rival.

In reality, Cleopatra was, well … let’s say she had personality. We know that because of coins from her reign that carried her visage. And unless protruding chins and huge hooked noses are what start your engine, you’re probably not going to fall so madly in lust that your judgment is clouded. Here, at least, she looked like the lunch lady who’d slap your hand away when you tried to sneak an extra chicken nugget. 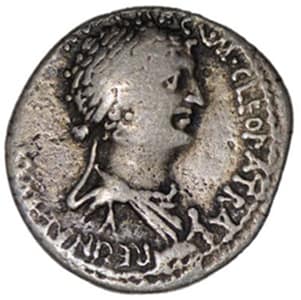 via WikipediaIts the face that launched a thousand ships … in the other direction.

That’s probably because she was the product of heavy inbreeding among the Ptolemaic dynasty. She only had six great-great-grandparents (you generally have 16 of those). So she wasn’t exactly Gisele Bundchen, nor is there any evidence she was some wanton harlot who slept around. She likely boned a total of two men in her life.

She was, however, a brilliant politician whose only goal over her 21-year reign was to maintain Egypt’s independence. She controlled the entire eastern Mediterranean coast before the boot of Rome came down on her. She was intelligent and capable — two traits Augustus didn’t want Rome associating with his enemies, especially the female ones. So she was discredited as a manipulative hottie who used her boobs instead of her brains. And thus began a long and storied history of disgruntled men playing the “She only got the job because she’s hot!” card.

Steven Assarian is a librarian. He writes stuff here. John BH wrote a book, and nobody is ever allowed to read it, so definitely don’t look it up here.

For more history and facts the world’s been missing out on, pick up a copy of the Cracked De-Textbook.

Support Cracked’s journalism with a visit to our Contribution Page. Please and thank you.

Previous Post: These Are The 10 Professions With The Most Psychopaths
Next Post: Janet Jackson Becomes First Black Woman To Receive Billboard Icon Award