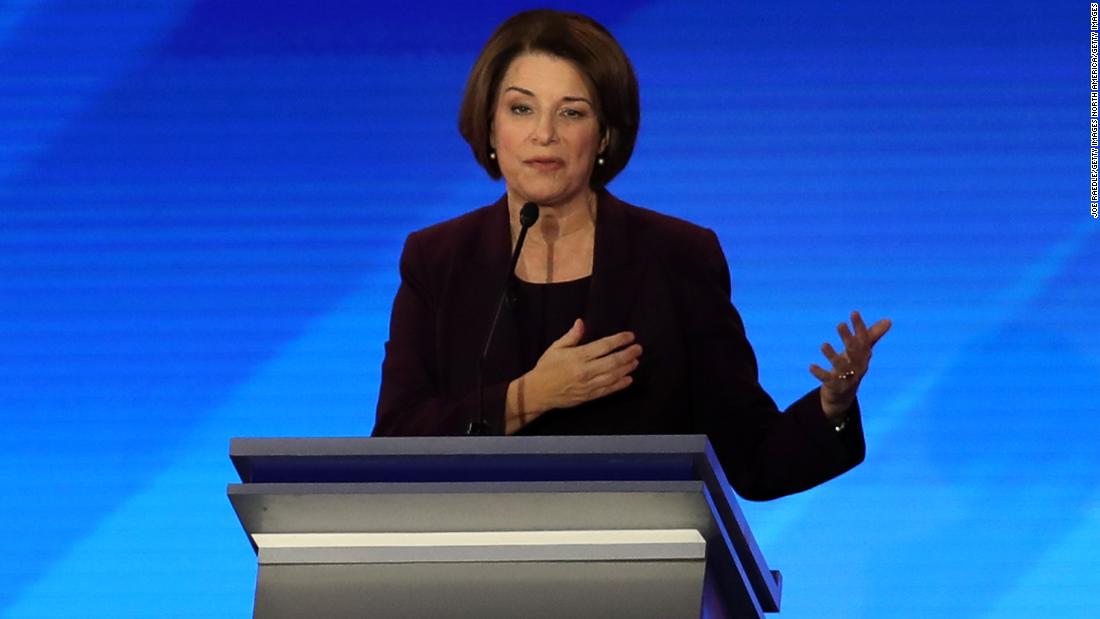 (CNN)One of the things we have lost — or forgotten — during the presidency of Donald Trump is empathy. Understanding that we are all, at root, far more alike than we are dissimilar and that caring for one another — at a basic human level — is something that transcends our political parties. Or should at least.

Which brings me to Minnesota Sen. Amy Klobuchar’s closing statement Friday night in the eighth Democratic debate in New Hampshire. Which, if you missed it, well, you shouldn’t.
Here’s the key chunk (it’s long but worth it):
“And I will tell you this, there is a complete lack of empathy in this guy in the White House right now.
“And I will bring that to you. If you have trouble stretching your paycheck to pay for that rent, I know you, and I will fight for you. If you have trouble deciding if you’re going pay for your child care or your long-term care, I know you, and I will fight for you. If you have trouble figuring out if you’re going fill your refrigerator or fill your prescription drug, I know you, and I will fight for you.”
“I do not have to biggest name up on this stage, I don’t have the biggest bank account. I’m not a political newcomer with no record, but I have a record of fighting for people. I’m asking you to join us at amyklobuchar.com. I’m asking you to believe that someone who totally believes in America can win this, because if you are tired of the extremes in our politics and the noise and the nonsense, you have a home with me.”
That’s really, really powerful. And a remarkable antidote to Trumpism, which, to paraphrase its belief system, goes something like this: It’s a kill or be killed world. The strong — or the most cunning — survive. Everybody else is relegated to “loser” status. And if you don’t like that, well then you are one of the precious snowflakes who belongs in the “loser” pile.
Klobuchar’s reminder is one about our common humanity, and the idea that the President of the United States is supposed to lead us on a moral front — to remind us how we are all in this together.
Trump has, in his first three years in office, totally abandoned the idea of the presidency as a beacon of moral leadership. That abandonment is most obvious in his assertions that there were good people on both sides of the Charlottesville, Virginia, race riot but it’s obvious in dozens of other ways too — attacking Lt. Col. Alexander Vindman, a Purple Heart recipient, looking the other way after the murder of journalist Jamal Khashoggi at the hands of the Saudi government, attacking a Gold Star family during the 2016 campaign. The list goes on and on (and on).
To be clear: Klobuchar’s closing argument in a debate that aired on a Friday night just days before the New Hampshire primary isn’t any sort of guarantee that her numbers — whether in the Granite State or anywhere else — will suddenly surge. (Tracking polls in New Hampshire do seem to suggest some Klobuchar momentum, however.)
And even if she experiences an uptick in Tuesday’s Democratic primary, she still has a very tough road to the nomination.
But none of that changes this basic fact: If you were searching for an encapsulation of the opposite of Trumpism, Klobuchar did it better than any Democrat I have yet seen. Which matters, whether or not it fundamentally alters her trajectory in this race.

Previous Post: Laura Dern wins her first Academy Award
Next Post: What The F*ck Is Going On In Publishing? | Betches