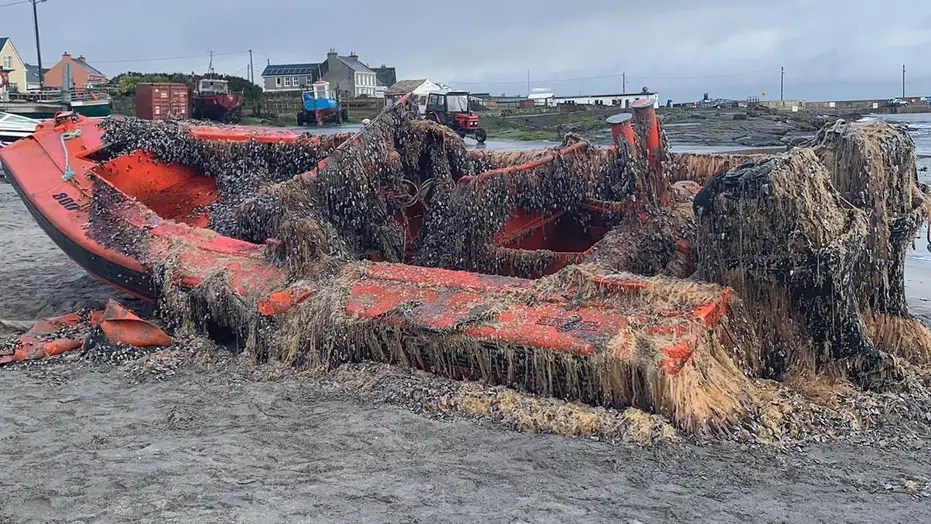 “Later we sent one of our crews and ferry to tow the boat [with the help of a local fishing boat] to the beach at Inis Oirr. Lots of islanders helped to bring it to the beach and we began to wonder where it had come from,” Doolin Ferry said.

It turns out the boat is a U.S. Navy High Speed Maneuverable Surface Target (HSMST) whose former home was about 3,300 miles away in Norfolk, Va.

“This boat was built in 2015 and it’s likely that it was lost during a training exercise, and it remained in the water drifting until it ended up in the water close to Inis Oirr and was discovered by the crew of the Doolin Express,” the company said.

Photos of the mystery boat quickly went viral after they were posted online by the Doolin Ferry Co. Their post had nearly 3,000 reactions and was shared 1,500 times as of Saturday evening. Many people commented wanting to know the origins of the vessel.

“Fascinating how it washed up in Ireland. Would love to know its story,” one person said.

Naval Air Warfare Center Aircraft Division spokesman Timothy Boulay told The Virginian-Pilot this week that the vessel was lost at sea in September 2018 during a missile test and evaluation exercise approximately 75 miles off the coast of Norfolk, home to Norfolk Naval Station. The Atlantic Target and Maritime Operations team searched the HSMST for five hours to no avail and later notified the Coast Guard of the potential navigation hazard, Boulay said.

Boulay said it wasn’t surprising the boat made it across the Atlantic, since the vessel is filled with foam so that it won’t sink.

“Our people are not surprised it made it to Ireland,” he said.