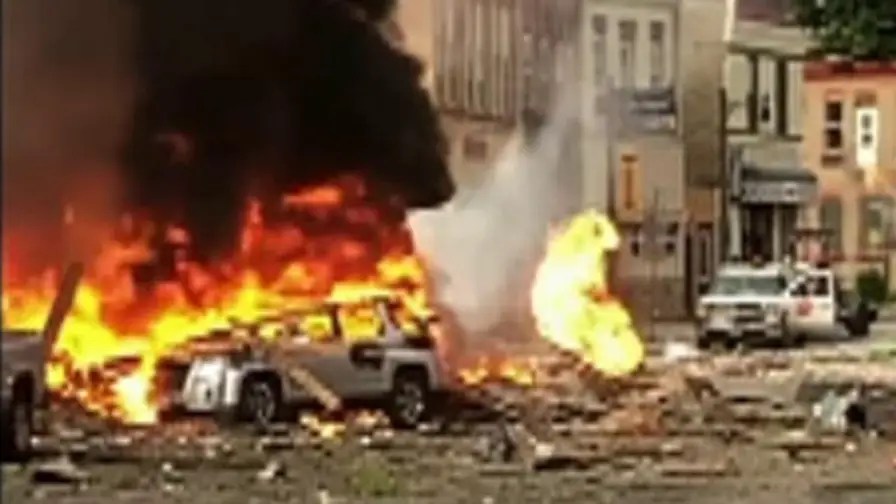 An explosion rocked the city of Sun Prairie, Wis., on Tuesday after a contractor struck a natural gas main, leveling buildings and injuring at least two firefighters and one police officer, authorities said.

No deaths were immediately reported and it wasn’t known if anyone else was hurt, said Lt. Kevin Konopacki of the Sun Prairie Police Department. The firefighters and officer were rushed to a hospital, but the extent of their injuries wasn’t clear.

Firefighters and police responded to a reported gas leak in the city’s downtown area around 6:20 p.m., before the explosion, authorities said.

WE Energies spokeswoman Cathy Schulze said the gas main strike was reported to the utility ahead of the blast, and first responders were working to shut off the gas to secure the area.

The @glassnickel building is fully engulfed from the #barrhouse #explosion that occurred across Main St in #sunprairie You can hear yet another small explosion. pic.twitter.com/teysecYiMH

The blast was reported around 7:15 p.m., and appeared to be centered on the Barr House, a local pub. Video posted to social media shows fires blazing with smoke billowing toward the sky amid a heavy police presence.

An employee of Madison’s WMTV-TV said his “whole house shook” from the explosion.

Steve Owen, 60, a small business owner, said he saw firefighters and police on the street just before the explosion. He said he saw a ball of fire as the building across the street “literally lifted up.”

Display nothing; This is on Publish with no configured Image

The Red Cross of Wisconsin tweeted that its personenel have set up a reception center for displaced residents at a local middle school.

Authorities were still working late into the evening to determine when residents could return to their homes.

This is a developing story; please check back for updates. The Associated Press contributed to this report.

Previous Post: Massachusetts State Police in search of ‘forever homes for 2 retired dogs’
Next Post: Pompeo’s North Korea meeting went ‘as badly as it could have gone’