Analysis: The president gripes about Fox’s news anchors, showing his disregard for journalism 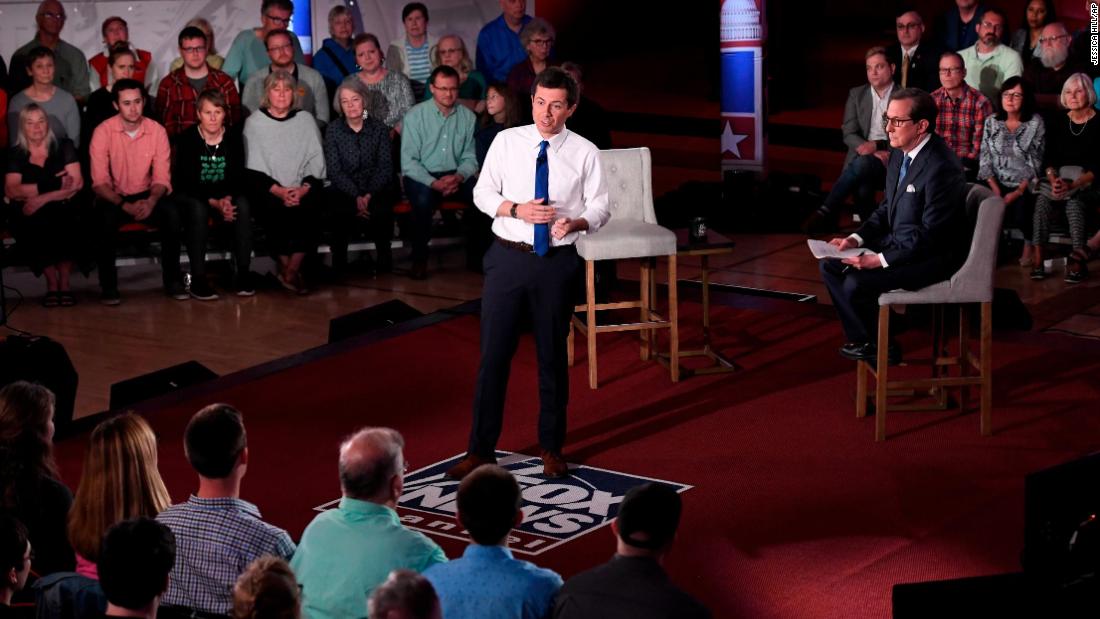 “Fox is moving more and more to the losing (wrong) side in covering the Dems,” Trump tweeted on Sunday before Buttigieg’s town hall aired.
Trump evidently expects more loyalty out of Fox, a network that he often promotes while attacking its competitors.
Fox’s highly-rated opinion shows are a key part of a political wall that Trump relies on to protect his support with Republican voters despite a nonstop barrage of scandals and embarrassments at the White House. But the network has been trying to emphasize its news brand lately, and that’s what the president bristles at.

He has taken several swings at Fox’s news anchors and reporters via Twitter this year — everyone from Shep Smith to Arthel Neville, Leland Vittert to Chris Wallace, John Roberts to Gillian Turner.
Trump has been especially consumed by Fox’s town halls with Democratic contenders for president. The network has televised three of them so far, first with Sanders, then with Amy Klobuchar, and most recently Buttigieg.
“So weird to watch Crazy Bernie on @FoxNews,” Trump tweeted after the Sanders event last month. He knocked the studio audience, putting “audience” in quote marks, for being “so smiley and nice.”
Later he followed up and said, without providing evidence, that there were “many Trump Fans & Signs” outside the studio, and he took credit for the economic conditions in Bethlehem, Pennsylvania, where Sanders’ the town hall took place.
He said there were “big complaints” about the Trump fans “not being let in,” again without providing any evidence for the claim.
“What’s with @FoxNews?” he asked.
But just two days later he snapped back to form and encouraged people to tune into Fox. He gave an interview to Sean Hannity the following week.
He didn’t weigh in on the Klobuchar town hall, but he did object to Buttigieg’s. Before the event started on Sunday evening, he tweeted that it’s “hard to believe that @FoxNews is wasting airtime on Mayor Pete, as Chris Wallace likes to call him.”
Wallace had been on Fox a little while earlier to promote the upcoming town hall.
Trump offered up a theory for why Fox was inviting the Democrats to take questions: “They got dumped from the Democrats boring debates,” Trump wrote, “and they just want in.”
The Democratic National Committee said earlier this year that Fox would not be included in the mix of networks that will host party-sanctioned primary debates in the coming months. Fox has urged the DNC to reconsider. The network has extended invites for town halls to numerous Democratic candidates. Elizabeth Warren issued a blistering and public rejection of her invitation from Fox News earlier this month.
Many progressive activists say Democrats should have nothing to do with Fox News, calling it an outlet full of pro-Trump propaganda that seeks to destroy the Democratic party. But others say that Democrats shouldn’t ignore the Fox audience.
Buttigieg advanced this view during Sunday’s town hall, simultaneously calling out prime time hosts Tucker Carlson and Laura Ingraham for, he said, operating in bad faith while also saying “I think a lot of people tune into this network who do it in good faith.”
Buttigieg won high marks for the town hall — and lots of loud applause from the studio audience.
Trump hasn’t tweeted anything about it, so far.
But in his pair of critical tweets on Sunday, he claimed that Fox “forgot the people who got them there” — meaning Republican party devotees.
Trump has a long and complex history with Fox, including weekly chats on “Fox & Friends” in the years leading up to his presidential run. He likes to take partial credit for Fox’s strong ratings.
And with his criticism of the town halls, he seems to be trying to keep Fox in line — and in his corner.
Fox analyst Brit Hume, a frequent defender of the president, replied to the Trump tweets and said, “Say this for Buttigieg. He’s willing to be questioned by Chris Wallace, something you haven’t done since you’ve been president. Oh, and covering the Democratic candidates is part of the job of a news channel.”
Philip Rucker of the Washington Post commented that Trump was admonishing a news network “for merely covering his political opponents.”
Maggie Haberman of The New York Times added that Trump was “telling them not to behave like a news organization.”

Previous Post: Game of Thrones finale gets mixed response
Next Post: Why China is not celebrating the unexpected Australian election result