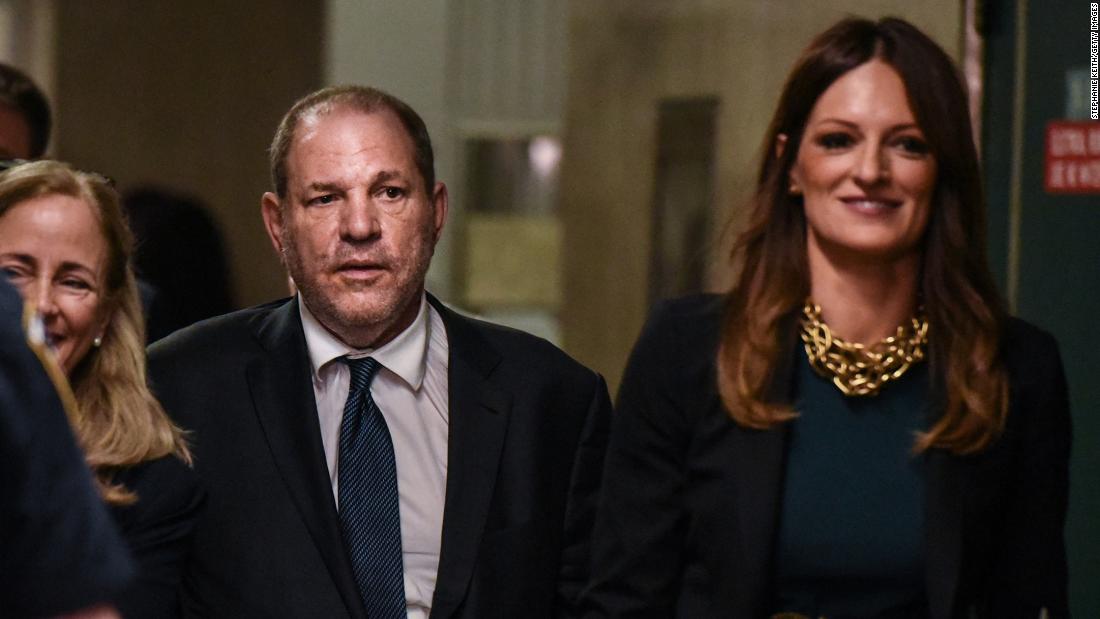 They replace high-profile defense attorney Jose Baez, who withdrew from the case after Weinstein engaged in behavior that made “representation unreasonably difficult,” a source told CNN in June.
Following the hearing that made Weinstein’s new representation official, Rotunno, a vocal critic of #MeToo, told reporters something the disgraced media mogul’s previous attorneys have stated: any sexual contact between Weinstein and his accusers was consensual.
“Over the course of the next several weeks and as this trial progresses you will hear things about multiple conversations and emails had that will lead you to believe that the facts that have been reported up to this point are not the full story,” she said, alluding to the team’s defense strategy.
“It’s going to be obvious that the relationships had with women in this case were quite consensual and we have a lot of documentation to back those things up.”

The strategy isn’t new. In 2018, Weinstein’s then-attorney Benjamin Brafman, who famously represented former IMF chief Dominique Strauss-Kahn against sexual assault charges, filed a motion to dismiss all charges against Weinstein, citing “dozens of emails” sent from one of Weinstein’s anonymous accusers, characterized as “extensive warm, complimentary and solicitous messages to Mr. Weinstein immediately following the now claimed event and over the next four year period.”
Even with a similar defense strategy in tow, Rotunno says Weinstein’s defense against rape and sex abuse charges by a female attorney helps.
“I think just as if he were casting a movie, this is a circumstance where he needed the right lawyers, and I think this type of case requires the right lawyers. I think a woman standing here could make a difference,” she said outside the courtroom. “I think it creates a different atmosphere in terms of my ability to have a conversation with someone on the witness stand. I think it is more effective to have a woman asking a woman questions. I think I come across in a way that might not seem bullying or offensive in any way.”

Last year, GOP members of the Senate Judiciary Committee employed sex crimes prosecutor Rachel Mitchell to question Dr. Christine Blasey Ford, a woman who accused then-Supreme Court nominee Brett Kavanaugh of sexual assault, to quell concerns about how it would look to have the all-male GOP committee members questioning Ford.
“I have the ability to get away with a lot more in a courtroom cross-examining a female than a male lawyer does,” Rotunno said in a February 2018 Chicago Magazine interview.
“He may be an excellent lawyer, but if he goes at that woman with the same venom that I do, he looks like a bully. If I do it, nobody even bats an eyelash. And it’s been very effective.”

Speaking to WGN radio in Chicago before her first official day representing Weinstein, Rotunno explained why she doesn’t buy into the Me Too movement.
“The problem is I don’t believe in movements in general. I think the problem with movements is they’re devoid of logic and fact, and people play on their emotions when they jump into these movements for whatever reason and whatever type of movement it is without really looking at facts and circumstances,” she said.

It’s a point that one of the prosecution’s expert witnesses in the Weinstein criminal case agrees with.
Dr. Barbara Ziv, a professor at Temple University and a member of the Pennsylvania Sexual Offenders Assessment Board, spoke with CNN in March to discuss the public’s perceptions concerning sexual assault, based on her three decades of experience in forensic psychiatry as well as her research and writing.
She spoke in general terms and did not speak about Weinstein’s criminal case, because, at the time, her involvement with the Weinstein case wasn’t publicly known.

Ziv said she doesn’t think the movement has done much to move the conversation forward — to understand what sexual assault is, who perpetrators are, and how women who have been sexually assaulted act.
“Not only does the MeToo movement not educate about why people — why perpetrators or victims — behave in the way that they do, in a way it can serve as, I think, sort of a shield behind which women and some men can sort of hide behind and not push the conversation forward,” she told CNN in March.
“It almost has become distorted to the point where if I say ‘MeToo’ then OK, then you just have to believe me, too.
“I think that that does a disservice to everybody, to individuals who’ve been accused of sexual assault as well as victims of sexual assault.”
Unless the MeToo movement becomes more “mature and more sophisticated,” Ziv said that is going to be the movement’s ultimate downfall.

The Presumption of Innocence

On his first day on the job after taking the defense reigns from Brafman, Baez told reporters why he took the Weinstein case.
“This case is testing the presumption of innocence in our country. And you have a man who needs to stand trial for these specific acts and he should be entitled to the same presumption as everyone else,” he said.
That’s what Rotunno echoed on her first day on the job outside Manhattan’s Supreme Court: “I took this case because I believe in the rule of law and the pursuit of justice through the vigorous challenge of searching for the facts. This trial will allow Mr. Weinstein to demonstrate just how harmful jumping to conclusions can be.”
Weinstein is accused of raping a woman in a New York hotel room in 2013 and forcibly performing oral sex on another woman at his Manhattan apartment in 2006.
He faces five felony charges: two counts of predatory sexual assault, one count of criminal sexual act in the first degree and one count each of first-degree rape and third-degree rape. Weinstein has pleaded not guilty.

Previous Post: Virgin Orbit ‘drop tests’ a rocket from a 747 aircraft 35,000 feet in the sky
Next Post: Ingraham: ‘Left’ trying to destroy what it means to be American